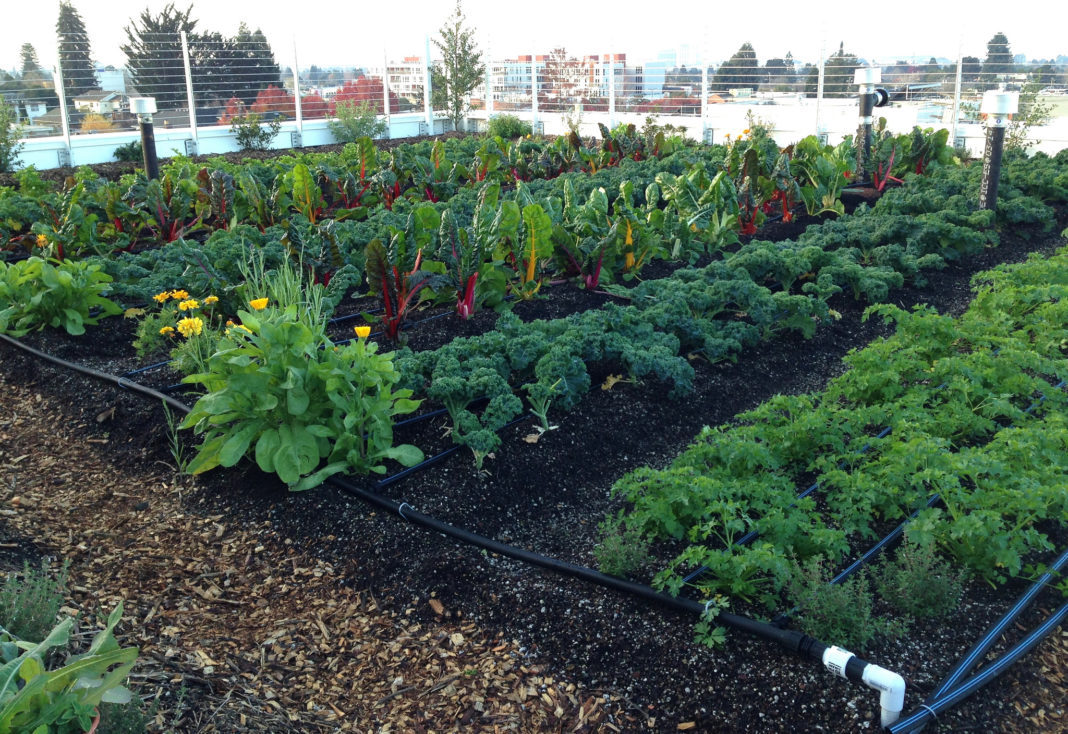 Imagine gazing out of an airplane window as you’re flying over a bustling metropolis, and rather than seeing an endless expanse of grey concrete, you’re greeted instead by a veritable forest of greenery. While this scenario may sound like a science fiction utopia, this vision is slowly becoming a reality as more and more cities are looking upwards, to their rooftops, to cultivate green spaces and gardens. These rooftop gardens work wonders on the environment while also providing a host of benefits to the city itself.

Rooftop gardens, cultivated soil layers created on the tops of buildings, were first developed in Germany during the 1960s. Now it’s estimated that roughly 10% of Germany’s roofs have gone green, and the practice has spread throughout many other European countries as well. The United States has been relatively slow in capitalizing on this movement overall, but certain cities such as Portland, Chicago, and Atlanta have implemented legislation encouraging its adoption, and the practice has become more commonplace.

One of the most prominent rooftop gardens in the U.S. is Chicago’s City Hall rooftop garden. This building has a markedly cooler temperature during the heat of the summer than any structures within the surrounding area. That is because traditional building materials tend to radiate heat from the sun, causing urban locales to become at least 7 degrees warmer than comparable rural regions. Rooftop gardens mitigate this “heat island effect” by absorbing the sun’s warmth into the soil.

Rooftop gardens combat city pollution as well. The plants grown on these otherwise-vacant building spaces filter carbon dioxide from the air and also serve as a water filter of sorts, removing heavy metals and other pollutants from rainwater. Likewise, these gardens tend to promote other environmentally-friendly practices such as composting. Increasingly, they’re becoming known as an essential tool for cities to use to reduce their environmental footprint.

Aside from their environmental benefits, rooftop gardens provide many citywide benefits as well. They can be used to grow food, herbs, and plants cultivated for medicinal purposes. They also store water, which can reduce flooding and wastewater contamination from runoffs. Additionally, they provide both thermal and noise insulation, which can reduce energy usage and building costs.

Not all rooftop gardens serve the same purpose. Some are more aesthetically inclined (consisting of trees, shrubbery, grasses and open seating areas) and others more practical (food and herb gardens, for example). Other variants, known as biodiverse or “brown roofs” consist primarily of gravel, soil and small native plants and are intended to serve as feeding stations and natural habitats for birds and other native wildlife species.

The positive environmental impact of rooftop gardens and their ability to integrate nature within the tightly-enclosed urban biome are important reasons to continue adopting them in cities around the world. By repurposing vacant rooftop spaces, these gardens not only enhance the urban aesthetic but also improve the quality of life within cities in some critical ways.

About: Daniel Epega is an environmental consultant serving a wide array of clients in the manufacturing industry. By combining his Environmental Science background with three years of experience in the public sector, Daniel Epega assists organizations in developing solutions that maximize efficiency while remaining in complete compliance with environmental regulations. In his free time, Daniel Epega enjoys yoga and rock-climbing.