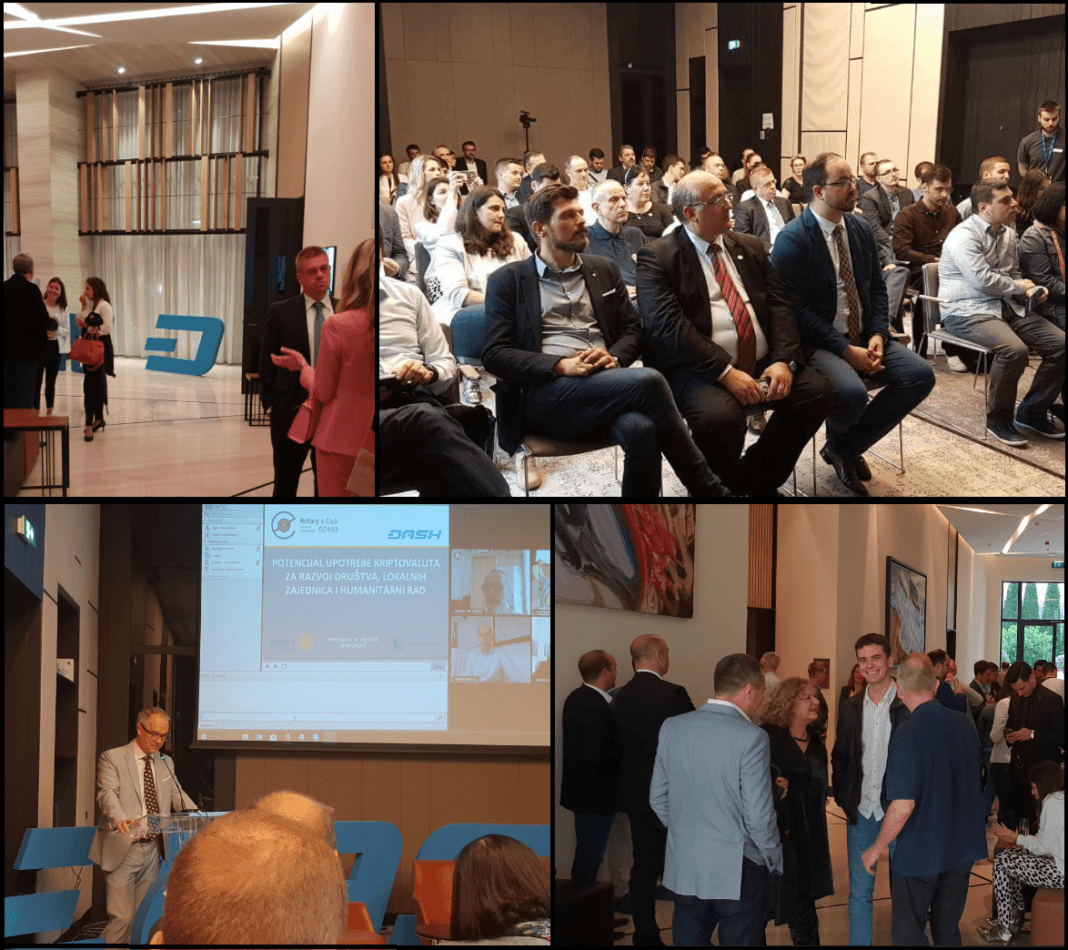 The blockchain conference titled: ”The potential of cryptocurrencies to develop our society, local communities, and humanitarian projects” was held at the Hilton Hotel in the Serbian capital of Belgrade on the 14th of May. It was organized by Dash cryptocurrency in partnership with the Rotary e-Club D2483, United Nations Global Compact, and KPMG. This is the first partnership project between a cryptocurrency and Rotary, an international service organization whose stated purpose is to bring together business and professional leaders in order to provide humanitarian services, encourage high ethical standards in all vocations, and to advance goodwill and peace around the world. Some recognized figures who have worn the Rotary pin include individuals such as Bill Gates, Pope Francis, John F. Kennedy, and Neil Armstrong.

The conference consisted of a panel discussion, a food-and-drinks hour, and a networking session. Discussion was facilitated by two well-known figures in the SEE ecosystem: Dr. Tamara Vučenović, the current editor of education department at Radio Beograd 2, and Vladimir Radunović, director of cybersecurity and e-diplomacy program at Diplo, a non-profit foundation established by the governments of Malta and Switzerland working to increase the role of small and developing states, and to improve global governance and international policy development. Mr. Radunović opened the event with a welcoming speech about the values of Dash and partnership with the Rotary Club, followed with the opening statement from the Ambassador of Sweden, H.E. Jan Lundin, who spoke highly of the potential of blockchain technology and a cashless society.

The panel discussion included three brief sections where the speakers presented their points of view, followed by a discussion with the audience. The members of the discussion were:

1) Arvin Kamberi from Diplo Foundation
2) Slobodan Milovanović, a blockchain developer, and Ph.D. candidate at Uppsala University, Sweden
3) Ivan Bjelajac, operating director at GoDaddy and CEO at MVP Workshop
4) Slobodan Marković, technical advisor at United Nations Development Programme
5) Nikola Božić, program director at Petnica Science Center and the winner of The French Academic Palms, a national order of France for distinguished academics and figures in the world of culture and education

The event attracted over 70 various political, media and business leaders from companies and institutions such as the US Embassy, Embassy of Sweden, Ministry of Internal Affairs, European Bank for Reconstruction and Development, United Nations Development Programme, GoDaddy, Bitcoin Association, MTS, N1Info, World Bank, Societe Generale Bank, Belgrade Bank Academy, UNICEF, PwC, Center for Investment and Finance, EBRD, WWF, Roda Engineering, Limundo, Diplo Foundation, and Startit, the leading startup organization and Google accelerator from Serbia. Guests had the opportunity to learn more about Dash Digital Cash, receive free cryptocurrency and other perks like Dash gift cards and T-shirts, and discuss potential partnerships. The event also had a humanitarian character and raised over $1,700 for children with special needs that were donated by the Rotary Club to the “Daj mi ruku” non-profit organization.

This is the first blockchain conference in the Balkans region that gathered a group of leaders from South-East Europe under one roof to discuss cryptocurrencies and their values, a mission that Bitcoin and other digital currencies were trying to achieve in the past. This means two things: 1. The blockchain industry is growing in the Balkans and more leaders are interested in the potential of cryptocurrencies. 2. Led by a Serbian entrepreneur, Nebojša Jović, Dash is set to be on the frontline of the blockchain revolution in the Balkans and establish itself as a regional leader.