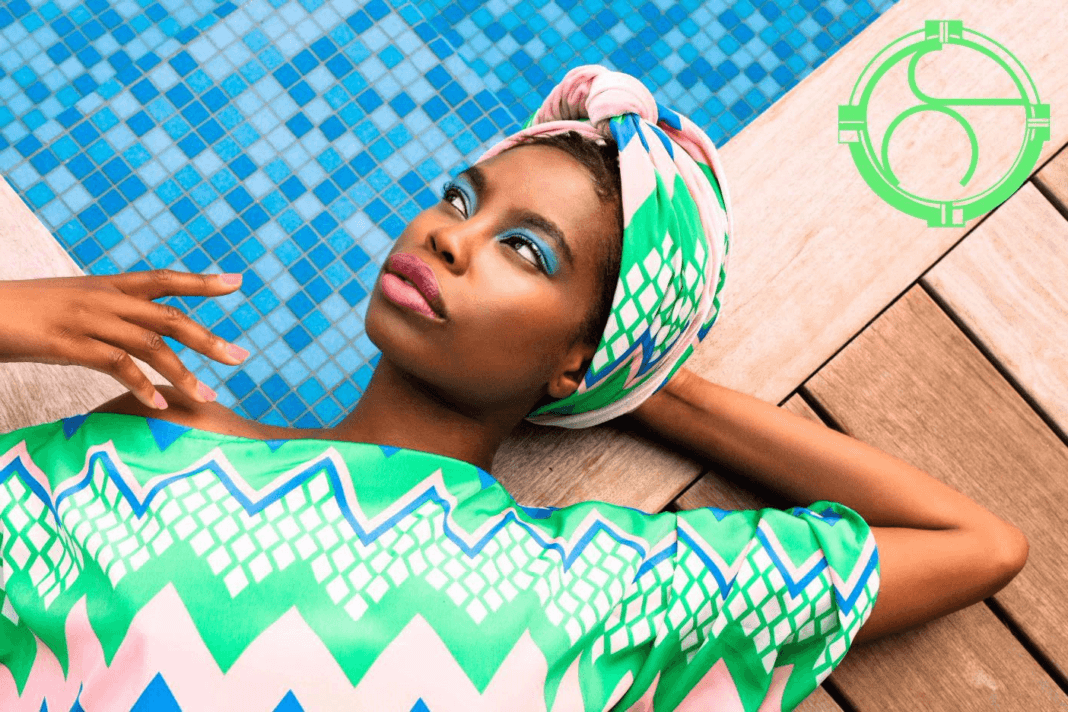 Tolula is the ambassador and model for the Seven 7 Footwear new campaign and also designer Julia Clancey’s resort collection campaign.

1- Hello Tolula, can you please tell us a bit about yourself?
Hello Sara, I am an Actress, Model & DJ. I have been modeling and acting almost as long as I have been DJing. The acting came first, age 11 when I was cast in a musical version of Shakespeare’s As You Like It and The Tempest at school. They were very inspiring productions and I remember crying when they were over. These experiences helped spark my love for theatre and music. I went on to National Youth Theatre in the UK and trained with various theatre companies and a stint training at RADA (Royal Academy of Dramatic Art). I already grew up in a musical household with my father’s amazing record collection and my mother’s love for singing in the church choir – where in fact my parents met as teenagers, but that’s another story! – Although my parents were not professionals working in the entertainment industry they have a love for the arts. So I think I was heavily influenced by their love even though they work in the scientific professions. I was scouted age 15 by the owner of Select Model Management while shopping in Oxford Circus, London. I then went on to model for Vogue, British and Italian Vogue. I modeled 3 seasons in print and advertising campaigns for Vivienne Westwood, Coca-Cola, Virgin Mobile. I also walked 5 fashion shows for Vivienne Westwood during London and Paris fashion weeks. I have walked for various designers in Paris and New York Fashion weeks, including London fashion week for Pam Hogg and other upcoming designers. I started DJing at age 21. 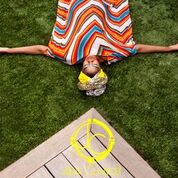 I was asked by my friend who founded a popular party in London called Boombox that was featured American Vogue, British Vogue, and all the other high fashion magazine. The party actually eventually became a magazine itself called Ponystep, plus international parties. I went on to do private parties for people such as artist Amanda Eliasch’s son who had turned 16, with Prince Andrew, Naomi Campbell and many other important people of the art and fashion world in attendance.

I went on to DJ and host a popular party at the then Bungalow 8 London member’s which was a huge hot spot an exclusive hang out for the time it was open. My party was called Tolula Tuesdays every Tuesday for a year and a half. Off the back of these events and through word of mouth I went on to DJ for Vogue, DKNY, Veuve Clicquot Polo Classic events, Soho House Coachella pop-up, GQ, Diesel, CAA Oscar parties to name a few. I have just been photographed for two fashion campaigns for designer Julia Clancey‘s resort collection and for Seven 7 jeans new footwear brand Seven 7 Footwear. I am also an ambassador for Seven 7 Footwear.

2- What are your focus areas and why?
Acting and music are my focus areas. But once you’re a model you will always be a model, just one of those things I have done from an early age. Same with acting, I started early in theatre.

3- How do you describe your journey in few words?
A wonderful adventure, full of dedicated hard work, with many incredible surprises.

4- Can you tell us about your music style?
My music style is very eclectic. In terms of DJing the description or correct term would be Open Format style. I have lived all over the world and have had many musically influences from different cultures, my environment, and my family.

5- Where do you think you are making an impact?
I was never the traditional model or traditionally attractive model – being on the shorter side and not totally stick thin either and modeling at a time when ethnic or black models were even that popular. There were always the trailblazer legends like Naomi Campbell, Iman, Beverly Johnson, Grace Jones etc – but they were the unicorns that were allowed to come through. They worked extremely hard to be in the position they are and also went through a lot to get there. A lot of BS, I imagine, not easy at all. Modeling is not an easy industry for anyone, no matter what your ethnicity. Obviously, it’s not open heart surgery, but it is a tricky industry to navigate. We are reading now in the news a lot about the entertainment industries and how some women and men are and have been taken advantage of for decades or victims of abuse or harassment… Anyway, that’s a pandora’s box for a different interview, haha. I get bloggers or people contacting me via social media saying how I have inspired them or they send words of encouragement in regards to my career choices. As a female DJ as well, who has been DJing for almost 10 years, I saw the development of female DJs in London, New York, and Los Angeles. 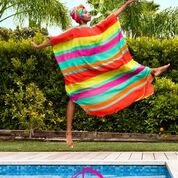 When I started I was modeling pretty much full time and so was seen as a fashion DJ. It was the time that people like Alexa Chung, Daisy Lowe, eaches Geldof were DJing and I was with the same Model agency so it was a synchronized movement at the time. I branched off to do my own thing and seriously pursue music in general and carve out a career as a DJ, especially in the US, where I found the DJ seen to be very male orientated. Music, singing, writing lyrics and DJing really just started out as a hobby, for the love of it haha. But then people were booking me by word of mouth. I think I am making an impact or making some kind of difference in all areas, from the feedback I get from strangers who contact me, it’s incredible and unexpected. I hope everything I do can inspire in some way, do what I love and make some kind of difference. I hope to set up my own non-profit foundation benefiting vulnerable children, women and young men around the world.

6- What were some of the biggest challenges you encountered while working on your new movie?
Great question and funny that you ask because it was my first time filming overnight for more than a day and it was tough, some days we did not finish until say 8AM. But the cast and crew were amazing and I thoroughly enjoyed the filming process. There were approximately 34 locations all shot in 22 days, which is a huge undertaking for any cast and crew – the crew made it happen.

My character is somewhat of a nocturnal animal against the beautiful Los Angeles, Californian backdrop. This is why I do this, it is exciting, challenging, uncomfortable, but extremely rewarding and cathartic. So these challenges help to keep the performance fresh and alive, so no complaints really. When it comes to creating, I do like to step outside of my comfort zone.

7- Where do you see yourself in the next 5 years?
Another great question, haha! When I said wonderful surprises in my previous answer it’s because there have been lots of great unexpected surprises that have happened in my life, I would say partly or mostly down to hard work and also maybe because I am pretty adventurous in my working life, I don’t mind taking risks, I think when you do take risks things open up to you. In 5 years time, I hope to have created somethings that are long-lasting. I am never satisfied once one project is completed I want more, always searching for that high, plus I think I am addicted to DJing. My father was a massive workaholic and same with my mother, so would explain a lot! The research, the performance, the music. I want to produce, music, movies… with my stamp on it. I once modeled for an older lady who had a beachy clothing brand, this was in the early stages of my career, around 16 years old, the designer said that she thought I would be very successful because I was niche. I sort of half understood at the time, but I have taken that with me these years – I think she was trying to say I have a unique selling point or something nobody else has. Niche is powerful!

8- What can you tell young women who are pursuing their dreams?
I know it is a cliche, but never give up under any circumstances. Saying that I would also measure up your strengths and weaknesses and proceed accordingly. I wanted to sing in my teens and I still do, but then I did not have the strongest voice, so I stuck to musicals and independent projects. At one point I almost signed with Sia and Jamiroquai’s management in London, they really liked me, but for personal reasons, I declined the offer. So I would collaborate with artists who are stronger in certain areas. In short finding collaborators or your team, so you can all achieve your dreams together. I tend to work with friends or friends of friends in my network in LA, usually from London or NYC. Also seeking out mentors is very beneficial.

9- What are you most excited about at the moment?
A top secret project that I am waiting to launch and get off the ground, I had to put it on the back burner during the summer because of filming and other projects It involves music and drama…. New modeling campaigns, auditions, booking more film and TV roles – so the upcoming pilot season with my fantastic agent. Also very much looking forward to seeing the film on the big screen.

10- The last word or final thoughts?
Stop baking oatmeal cookies with raisins, they taste better without! Haha. In the UK there are many places to purchase plain oatmeal cookies which are delicious. I think I am missing London, Europe as I haven’t been for 2 years I have been focusing over here in the US. I really miss British sweets, there is an authentic shop but it’s far and never get the chance to go.
But lastly, I am loving living in California, I love West Hollywood which is now my home, so vibrant and home to a diverse group of characters.I’m finding it exciting and challenging establishing myself in America and going onto the next level.