Interview With Atif A K, Author of Automation vs. Autocracy: Robogeddon En Route 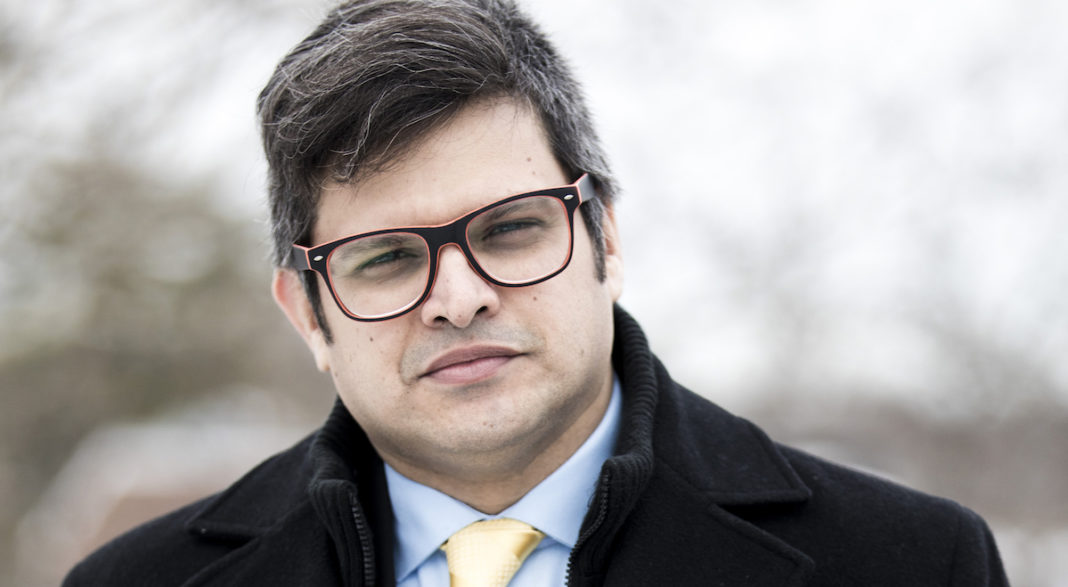 1- Hello Atif, can you please tell us a bit about you?

I have been a commercial writer for the last twenty years now. Before that, I took writing lessons when I used to write for pleasure and intellectual vomiting. I used to work at the Executive floor in Marriott where I had sort of solitary confinement. That’s where I started transferring my brain worm into a bookworm. I wrote philosophy when I was a teenager – the world views the way it should be. Little did I know that it was a soul about to step in the real world where the perfect world doesn’t exist.

Over the years I have written in all forms and for products under the sun. Many leading brands such as Coke, Walls, Nike, HSBC, Gillette and too long of a list to mention here. I have done screen-writing too. So basically my writing evolved as it transcended through different media. And the new media always provide it with an additional scope with the way I see things through the membrane of that specific medium.

It has been cathartic, particularly with reference to poetry and songwriting. It has taken a confessional twist and easy for my achy-breaky heart to weather this timid life.

My focus calls for things that are not talked about. Not addressed. Things that people shy away from or are scared to ponder upon. When I see people looking the other way about a certain issue- it attracts my attention. I am innately curious and almost never killed the cat. It provides a better horizon to think through things and wrap my head around the subjects that require the understanding of the bigger picture. Although I consider myself apolitical but there is a lot that I observe that doesn’t go unnoticed. As a ghostwriter, I had written Faces of Change and Keys to Social Entrepreneurship. Then I recently wrote, directed and produced a documentary named ED vs IT about the effects of Education Technology in future. It is available on Amazon and has been nominated for many film festivals. Also, I am working on a documentary called Need4Greed. So yes social issues with a political twist are mostly my focus. My activism is endured mostly in such directions.

3- Can you tell us more about your book?

Automation vs. Autocracy is a book that hits the nail on the head. While the world is still divided between the efficacy of Socialism and Capitalism- I think it is autocracy that really needs to be considered. There are all sorts of economic and political structures that have survived in mixed and purest forms. What differentiates them is the lust for power and lack of the ability to follow the public cause. All governmental forms and Econo-political unions are meant to serve people in a better way. But same people who break the clutter of autocracy become part of it as they get addicted to its power.

In this case, I have investigated the role of technology over the course of human history and how it has intervened time and again to revise and redefine the social canvas. 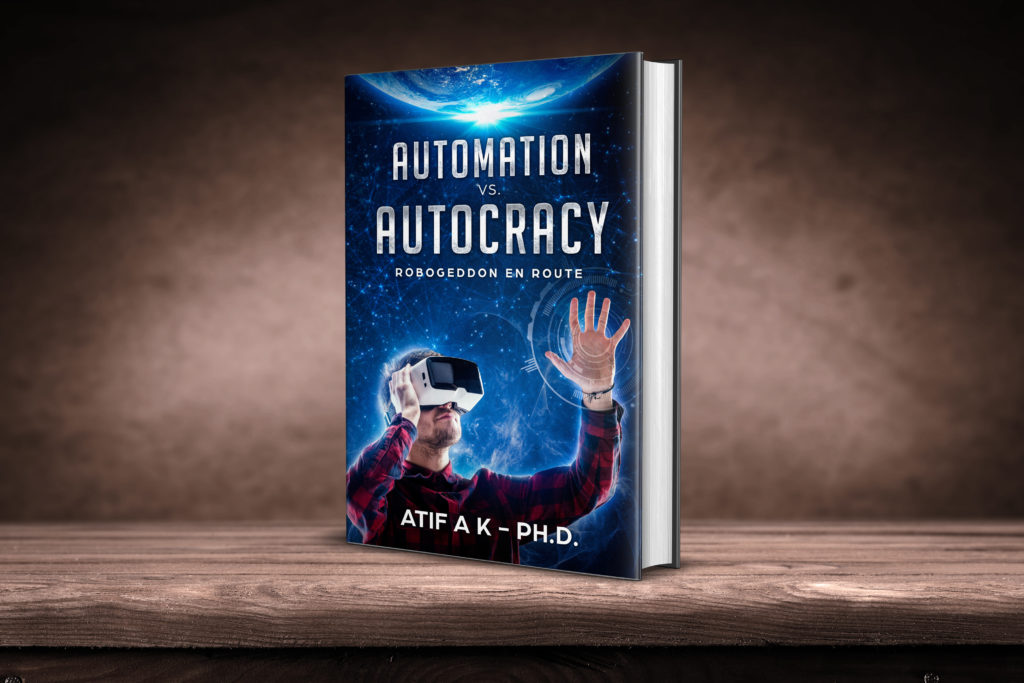 There is more to life than Tweets and FB status updates. The way I composed the information and analyzed it for studying the nuances of automated technology with regards to autocratic hold has been nothing short of an outrageous revelation and an unprecedented discovery into transcending social values in its backdrop and the galvanizing power-play that tags along technology in the socio-Econo-political arena.

There are symmetries and like the cliché that history repeats itself. And yes it does, for a different reason. Our psychological needs keep adapting to the same direction in various environments.

4- Where do you think the book is making an impact?

The book scores where people want to see through the gaps and where technology is going beyond itself- in terms of means to supervise and monitor the activity. Only yesterday FB announced its new policy that now they won’t promote cryptocurrencies and various non-backed advertisements. It had become so easy. Scammers can use anyone name and credit card to promote and trap unsuspecting and vulnerable people.

There is a reason net neutrality has become a controversy. It’s like obstructing freedom of speech. But there is a thin line between security and privacy and free speech and defamation. This has to be explored and pros and cons must be understood so that future advancement can tweak their directions and the same mistakes are not repeated.

So those who want to look beyond the obvious and who don’t tend to get carried away in the trend are feeling alarmed. It’s almost a wake-up call and not a false alarm- if we don’t adjust our sails, it really can become catastrophic in terms of even distribution of resources, economic balance and human freedom. We don’t want to see humans caged in robotic prisons controlled by automated servers. Do we?

5- Do you think people are aware that automation could become a resource apocalypse with an unavoidable Robogeddon?

Yes, that’s the point. You see robots have no accountability. You cannot imprison them. It is easy for technologies to blame the discrepancy on the lack of supervision or system failure. Robots are already used in warfare and disaster recovery/management. Do you think tomorrow we can robocops? Or maybe roboguards? It is way scarier than we think. There is no contraception required in sex robots, and many can please more than humans can endure. But remember it requires a real human at every terminal to monitor the qualitative aspect of things. You must have heard that YouTube recently employed thousands of employees to monitor their videos. Why? Suddenly, the algorithms are insufficient. No, they never were, and they never will be. Because remember the perfect world doesn’t exist- even in virtual dimension or matrix. We are moving towards Artificial Intelligence where our own intelligence is at stake. We are forced to accept things the way they are without much control over our ability to accept or reject them. How is it possible that we can earn endless ad revenue without even screening the subjective nature of information or propaganda tools. The promise is far bigger than the actual delivery. And this will prompt people to control resources in the worst form ever known to mankind. There is no tangible exchange required anymore. At least for the most part. Every transaction goes digital without even seeing the actual money. You pay me, I pay to the outlet. That’s it where is the hard cash? You must have heard about jackpotting ATMs yesterday. Who will pay for those empty ATMs? Insurance can cover a limited level- who will protect our e-wallets? Those who blame the system failure for their negligence? I don’t want to take sides but the truth is there. Tomorrow I can have a robot that can work as my bodyguard- he won’t ask for a salary or eats, sleep, drink. But it can kidnap me if someone tempers with its programming. So its lose/lose not even win/lost or win/win. Our terms of endearment are becoming terms of endangerment.

6- The book also comes with a list of solutions and suggestions, do you think today technology experts are ready to adopt these solutions or do we need more awareness?

Well, that was my motivation. To bring to knowledge areas that require attention. If they are proactive- it will be good. Yesterday I saw the Google CEO and You Tube’s head being grilled about automation at a public forum on MSNBC. If they won’t take the notes, they will be forced by the regulatory bodies to adopt these measures. Or else the situation will be manhandled where everything will topple and digress back in the name of net neutrality.

I see myself making movies and documentaries or may be forming a citizen pressure-group that dissects between governmental bodies and corporations to safeguard rights on behalf of an unassuming population that faces the backlash when it is too late. Or maybe in compliance or CSR function of tech firms like Google, FB, Twitter, Amazon, Microsoft or Apple. But that’s possible only when they agree to take responsibility and scale ahead of the needs of consumers. Not just selling features without their proper scalability.

Redefine everything. All this clutter needs to be cleared. Improvisation is the need of the hour. But introduce new tools to facilitate others and provide a new matrix to think and live ahead of time. We as humans have remarkable skills to anticipate, predict, judge, speculate and plan ahead of time. Lifespans are increasing- so the quality health is another area that they must address. We already know that hardware/software integration is so beneficial and productive. The detach between mainstream and new wave is too much and its high time we make the alternative the mainstream- or the new media the mainstream media. But not to forget the responsibility factor. Don’t go blindly into cryptocurrency mode of thinking. The basics of human needs will always remain intact and ultimately the actual life matters, no matter how far ahead in the game we get with regards to the virtual world.

I am excited about the VOD platform and how suddenly we can create great films out of our bedrooms. Suddenly, even James Cameron is nervous because studios won’t give him money until is profit ratio is as high as indie filmmakers. Studios don’t want to attach big budgets as they know safe, generic films are very risky these days. People are looking at Netflix and Amazon to carry the baton forward. The penetration has increased dramatically. We can now tell stories that were too unnoticeable for the studios. Either they didn’t have the commercial spice in terms of content or they were not talking to everyone. Now like every human group can have their own thing online and on social media presence- soon we’ll see great movies churning out about stories never told before. Nothing is unimportant if you can tell it with craft.

Well, it was nice to have exchanged few thoughts and shared some idealistic charades with you. I hope your readers enjoy this as much as I did share my side of the story. If they relate well, all this can become relevant in their lifestyles and thoughts that can have a definitive effect on their futures.