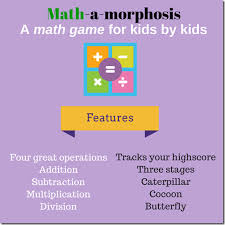 Fatima Kazi designed Math-a-morphosis for people of all ages using leading-edge coding.
Fatima Kazi spent the final weeks of middle school and the end of her summer learning C# programming, a computer coding language, in order to write a math app to help her younger sister and eventually others who struggle with math.

Fatima Kazi’s end result was Math-a-morphosis, a fun, colorful math-based app that moves users along through levels of metamorphosis as they enhance their math skills. The app is available on IOS, Android, and Windows.

Math-a-morphosis is designed to help with basic math skills and has three levels for users to build their skills. Players add, subtract, multiply, and divide to transform from a caterpillar (easy level) to a cocoon (medium level) to a beautiful butterfly (hard level). Scores are kept for each round, adding a competitive edge to the game.

Recently, the app has won a Pascal Award at the Bay App Festival. The App Festival Pascal Award is for app developers under the age of 20, named after Blaise Pascal who invented the mechanical calculator at the age 19.

The app isn’t just for children. Joanie, an adult literacy instructor, gave the app a five-star review saying, “I do work with adult literacy students and this is exactly the sort of app with a clean UI, simple to use, etc., that is PERFECT. Great job!!”

Twinkle Ideas is a collaborative of three homeschooled sisters, all in elementary and middle school, who strive to help others with programming, crafting, and more.

More information can be found at http://twinkleideas.com/.