9 Mistakes to Avoid When Renting Your First Vacation Home

How is Bandwidth Stolen? 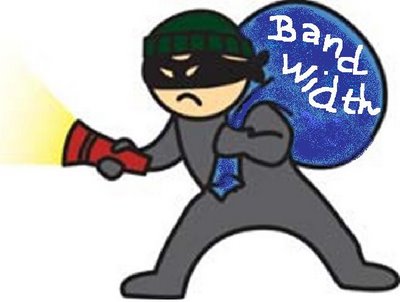 Files that are loaded to or from servers make use of internet bandwidth to push files along the network at various speeds. Every time you upload a file to your ISP, surf the web or use an audio application, you are using bandwidth.

Bandwidth is wires or fiber that connects a server to a single network. It depends on the grade or quality of the wire to determine how large of a data is coming across the network where your sites are hosted. When someone attempts to get more data than can be handled by the network, the whole network slows down.
ISP’s can put a limitation on bandwidth at certain times during peak periods or charge you a flat fee per month for bandwidth usage. If you go over the flat fee, then they charge you extra for using extra bandwidth. Some ISP’s will shut down the transmissions until traffic is more stable on the network.
You can load most files (images, sound files, videos and flash scripts and other programs) in your web site. This excludes banners, pop ups and certain documents or images that are supposed to be loaded from the main server.
Bandwidth bandits link to images and other files directly to some other server instead of putting them on their local server. There are various reasons as to why they do this but one reason is to get as much bandwidth as possible to show their links and images. So “stealing” images and audio files each time the site is initialized means that they are stealing bandwidth.
There is a specific ways on how you can stop a person from stealing your website’s bandwidth allocation. If you happen to know their email, contact them or go through Network Solutions and do an IP lookup which will give you information on the person and who the site is registered. You can always get in touch with the company that hosts their site too. Bandwidth can be expensive and the last thing that you want is someone stealing it.
- Advertisement -

Skills and Education Options for Getting into Nursing